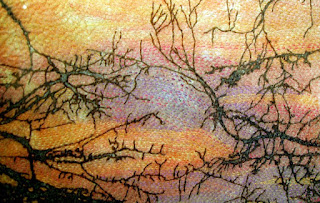 This was my entry into the Fire competition at the Hodgson Loom Gallery. I won the prize in the 2D mixed media category. The embroidery resulted from a photograph I took early one morning a few years ago, of a close up of one of the trees in our field. This was bonded upside down onto a bamboo cleaning cloth ( Yes, the ones you are supposed to use for dusting!). Bamboo fabric has the feel and lustre of silk. The white paper on the back of the printout was then rubbed away mostly with a sponge. More of it than I intended was removed so I then worked inktense pencils and sepia pen into certain areas. The whole was then stitched using stranded cotton in a Kantha stitch.
The U3A herb group met on Wednesday. Three of our members did short presentations. Jenny did one on herbs used by North American Indians and gave us some beautiful print outs. Sandi told us the fascinating history behind recently discovered illuminated manuscripts in which cats are depicted wearing medieval clothing and there are borders of herbs and flowers surrounding them. At a later date we are going to try to work out which plants are illustrated. Lesley talked about the myths behind some of the herbs used by ancient Greeks and Romans. I gave a short talk about knot gardens which led to discussion about box blight and alternative herbs that we could use as edging plants.
We also exchanged information about seed catalogues and discussed possible venues for visits in the spring and summer.
Posted by Pat K at 08:38 No comments:

The theme of the annual competition at the Hodgson Loom Gallery this year is fire. I was struggling with my entries as the colours of fire are a lot brighter than those that I usually work with. I like to research widely before I begin a new textile piece and this led me to study Native American fire symbols and I was also attracted to images of the Lightning bird. I originally was going to work one large felted area with hand and machine stitching. Much of the wool used in the felting was from local Jacob's sheep, incorporated with other plant dyed wools. The wools were mainly dyed with Dyer's chamomile flowers from my garden which I put in a flask with alum mordanted wool. Due to the unusually warm weather we have been having. The chamomile has been flowering for many months, so I keep picking them and drying them on the windowsill. I started to machine stitch on the resulting felted area but did not like it. If in doubt I can be quite radical, so I cut the felt into small squares. On each square I hand embroidered a North American Indian sun symbol. A large piece of yellow dyed wool was then felted separately and on this I hand stitched a colourful lightning bird, The whole lot was then laced together over a piece of orange organza. 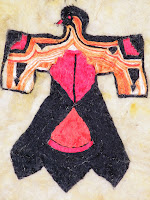 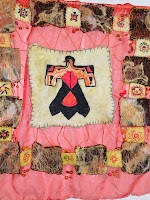 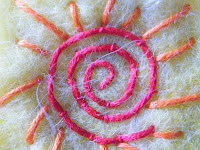