My exhibition held in conjunction with my very talented friend, Sheena Quayle, the other half of 2 Connect is now in its second week. I will give some details of a number of the works seen below. 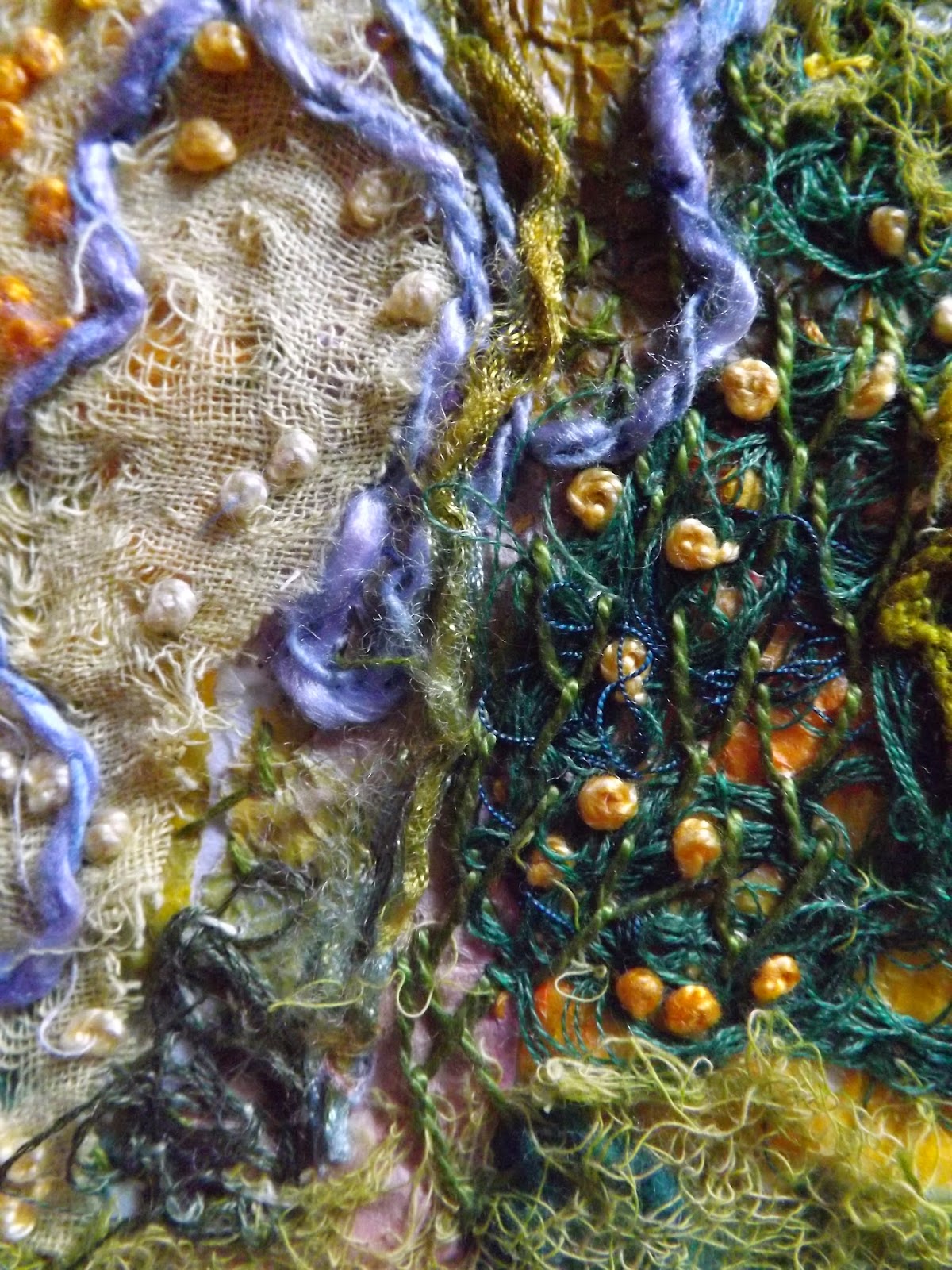 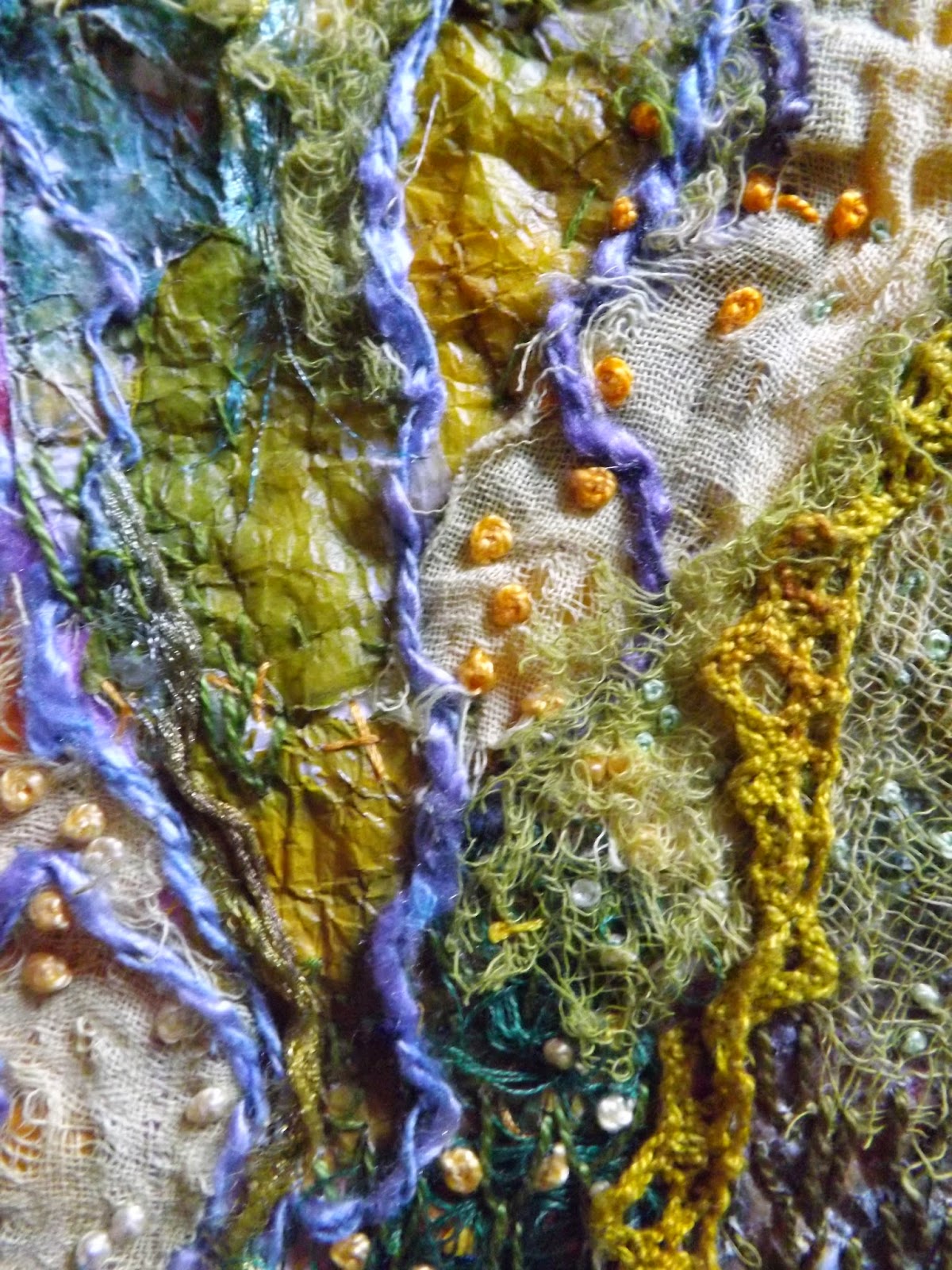 These first two pictures are from a piece of work based on photographs I took of lichen and mosses on a tree. Most of the threads, braid and muslin are procion dyed The background is tyvek and tissue paper both painted with diluted acrylic inks. I then made layers which were integrated using hand stitching in both chunky and fine threads. My favourite stitches which I used were French knots, fly stitch and couching stitches. I wanted a sense of depth and also flowing and sinuous lines. It is surprising when studying the bark of trees that there are a great variety of colours and shades which can be quite startling on an old tree. 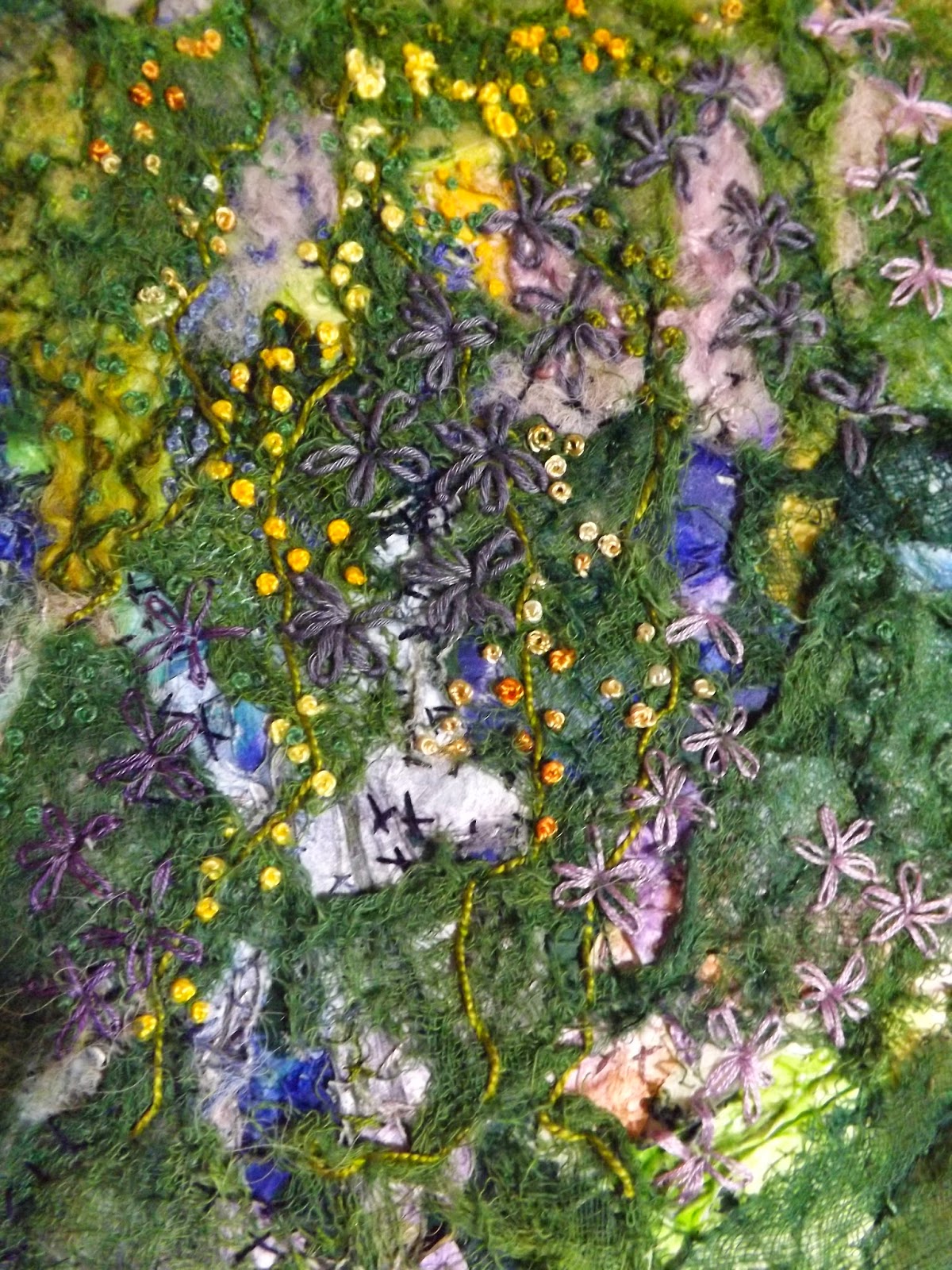 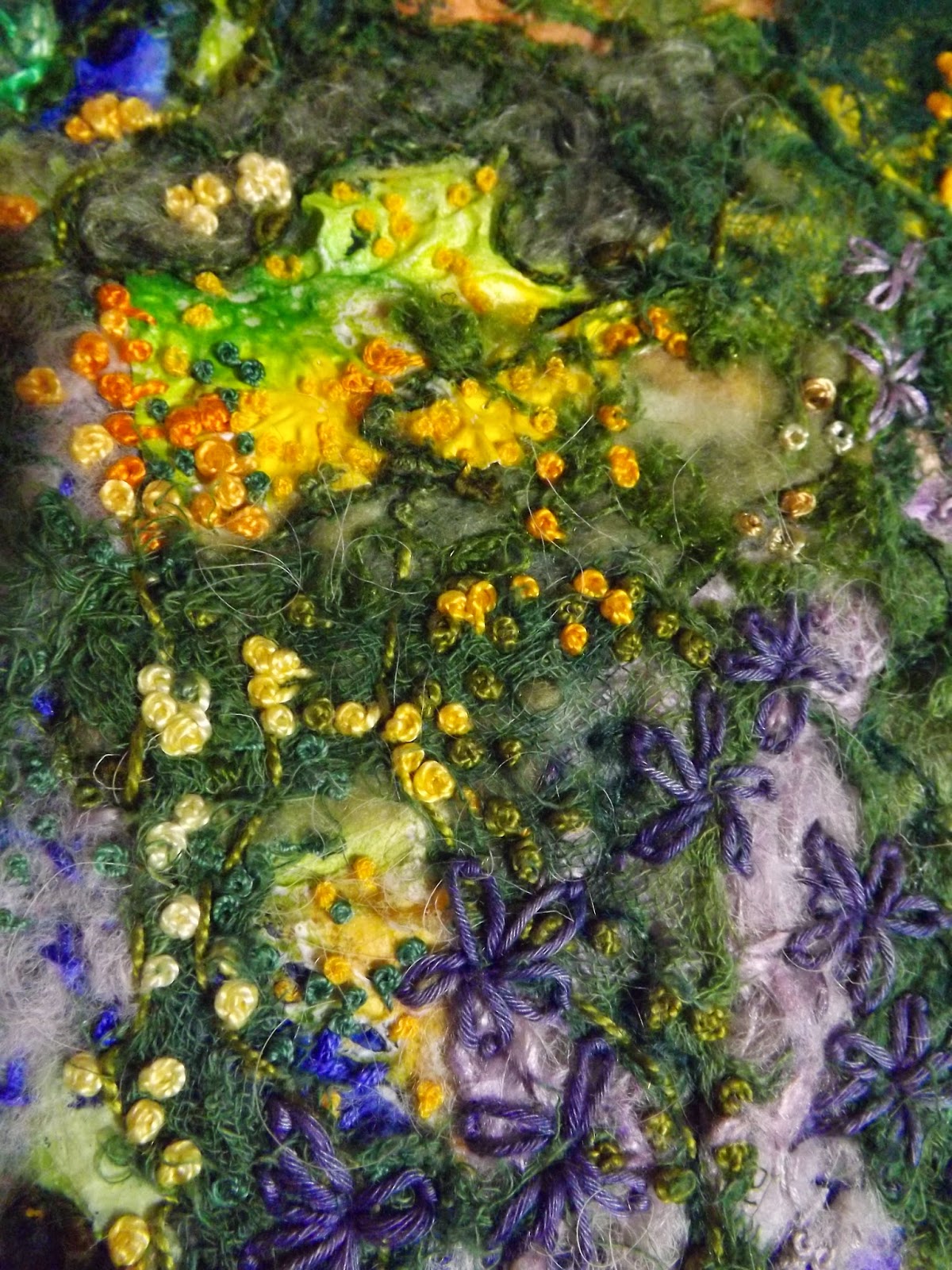 The 2 pictures above are based on photos of lichen and moss from a different tree. As in the other work the background was acrylic painted tyvek and tissue paper this time the tyvek was heated after painting to concentrate the colours and to give added texture as the tyvek warps when heated and forms interesting holes. Procion dyed muslin and threads were then applied, this time the stitching involved French knots, couching stitches and lazy daisy stitches.
Posted by Pat K at 12:52 No comments:

I am able to catch up on my blog at last as my exhibition with Sheena Quayle at the Hodgson loom Gallery is now open for the next two weeks. Pictures from that to follow in the next post.
I have been busy for the last month picking berries from my Forest Garden and have some new additions this year. The biggest crop has been summer fruiting raspberries which have been very well flavoured this year; the autumn fruiting raspberries will be ready in a couple of weeks. Sadly our strawberry crop has been a failure as I didn't renew the plants to replace the ones that have been hugely productive over the past 4 years. A job for next season.
The redcurrants mostly were eaten by 6 blackbirds but as my garden is mainly for wildlife I don't mind too much. The blackcurrants and gooseberries have done well though. My favourite berry is blackcurrant which I prefer to eat straight from the bush. As I made 50 pots of jam last year, thankfully, I don't have to make any this year so the fruit is going in the freezer to be used in the winter with yogurt for my breakfast. I  make a lovely desert by crushing digestive biscuits in a ramekin dish, cover them with my raspberry puree with a teaspoonful of whisky and then put Creme Fraiche on top....yummy.
I also grow loganberries which are now forming strong canes, Tayberries, Blueberries and Salmonberries, the latter unfortunately are taking over my garden.
The latest additions are Japanese Wineberries, a beautiful plant, pictured below and Balloon berries which grow on canes with nasty spikes and the berries are a strange black with white which gives the appearance of mould but isn't. My Nepalese raspberry plant grows rampantly over the ground but as it has been there for 4 years and produced no fruit I threatened to dig it out. The next day one flower appeared but no berry yet so it lives for another year! 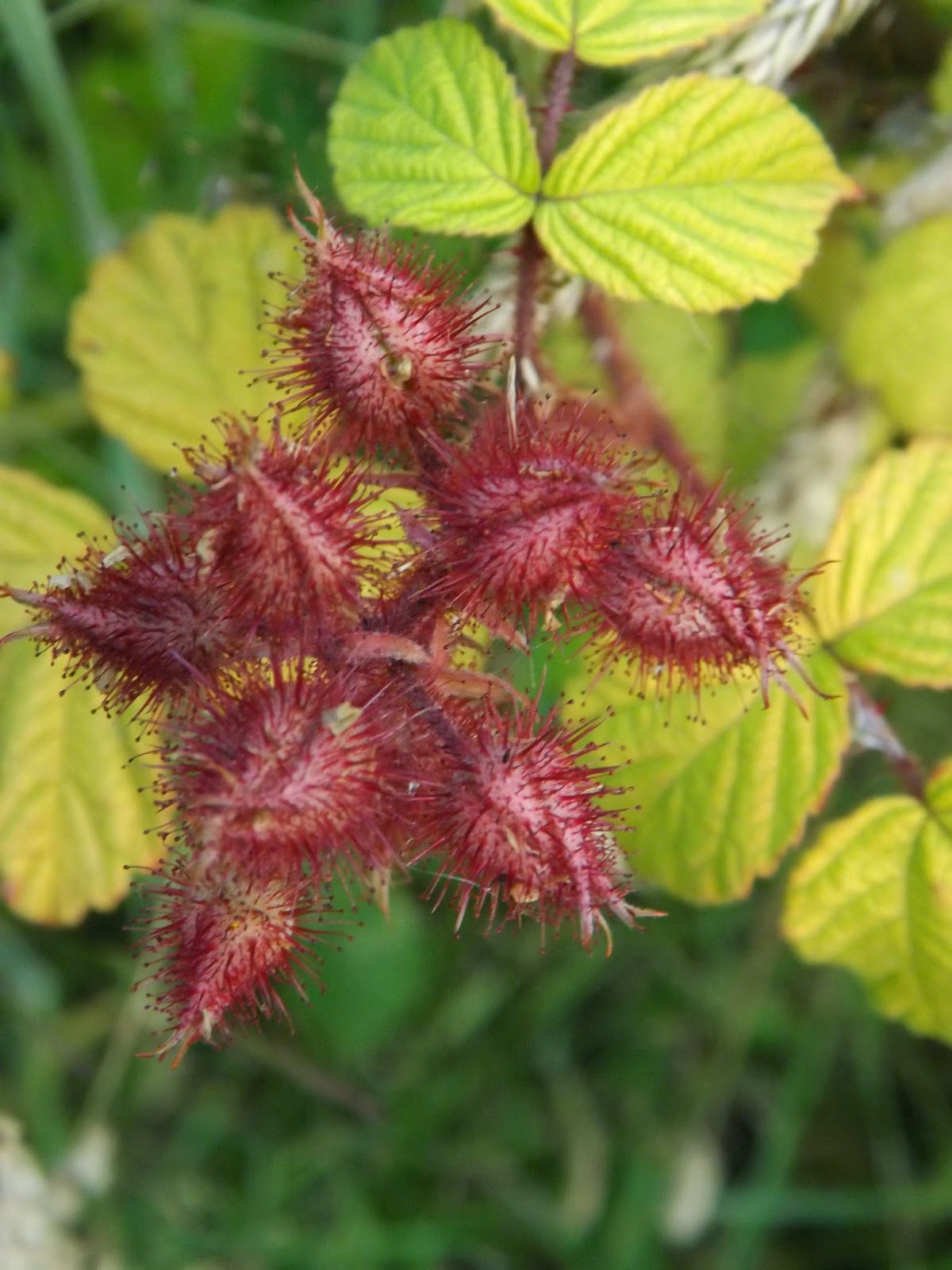 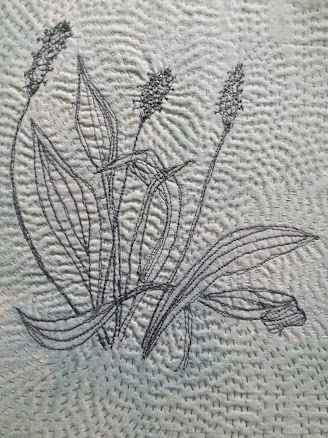 I am about to put on another exhibition with the hugely talented Sheena Quayle under our exhibition name
2 Connect. I have been studying biological forms and Sheena has been looking at form and function.
Most of the work in this exhibition for my part has been hand stitched, my first love. I did sketches from my forest garden at the end of last year and used some of these as the basis of several pieces. I run a U3A herb group and several framed works are of herbs. I have used a wide variety of media with the stitching including watercolour pencils, paper, painted fabric and glass paints. It has been a great pleasure working for this exhibition and if anyone living on the Isle of Man would like to see it, the details are below along with a couple of pictures of my work that can be seen at the gallery. 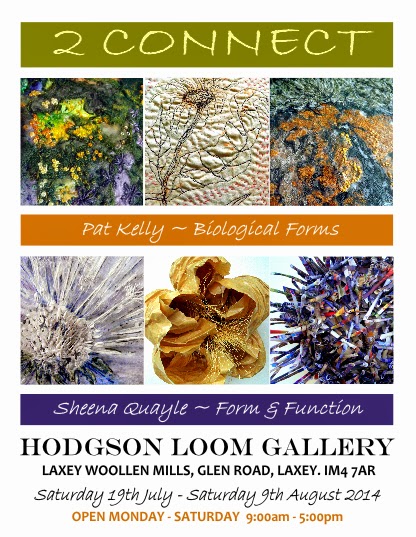 I have also hand stitched butterflies which I hope to turn into brooches. I found a wonderful box, hand painted in India which is padded inside and has pins which I can use to display the butterflies in the manner of a collector. These will also be on display at the gallery.
On the right is a piece of work based on plantain with watercolour pencils, hand and machine stitch. Below is a photograph of lichen printed onto tissue paper and then machine and hand stitched.
Both of these pieces of work have since been sold. 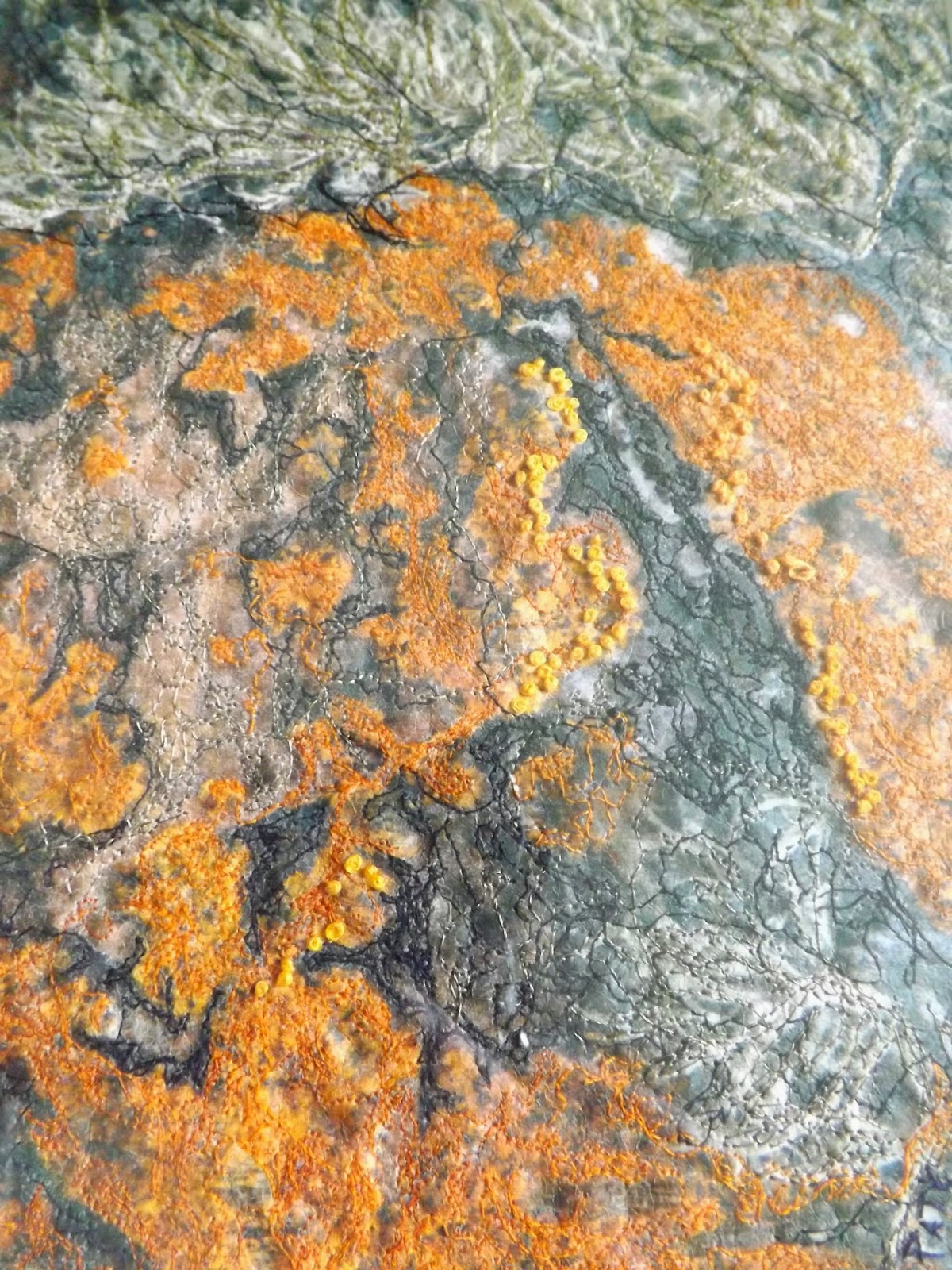