It is pomegranate time again, one of my favourite fruits which I eat on their own or with a mixed leaf salad. I also loved drinking fresh pomegranate juice while I was in Turkey last year. The pomegranate, Punica granatum is a shrub which grows to between 5 to 8 metres. It has been mentioned in the Book of Exodus and the Quran. The fruit is used in Ayurvedic medicine to treat diarrhoea and intestinal parasites and the seeds and juice are considered a tonic for the heart. In Ancient Egypt, the pomegranate was a symbol of prosperity and in Ancient Iran it was a symbol of fertility, it is a also associated with the myth of Persephone. I bought some pomegranates a few days ago but forgot to eat one, so as I hate waste, I boiled up the whole of the rather rotted fruit and made a dye. To the dye bath I added Alum and then mixed fibres and cloth such as carded cocoon strippings, wool threads, calico and cotton thread. Each fabric and thread took the colour in a different way, the calico turned a soft pink, some quilting wool turned yellow and surprisingly the carded silk became a dark chocolate shade with areas of ginger. 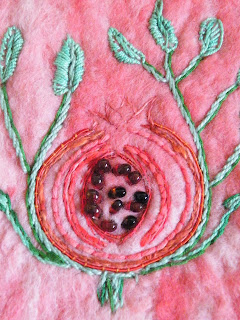 I created a piece of work for my Amulets and Talismans exhibition. The design was produced using sketches of tiles from a courtyard in Granada. The wool was dyed with Brazilwood and then hand stitched. Some beads were recycled from a necklace, a lucky find as they closely resembled the seeds of pomegranate. This can be seen above. This piece os now sold.
Posted by Pat K at 12:45