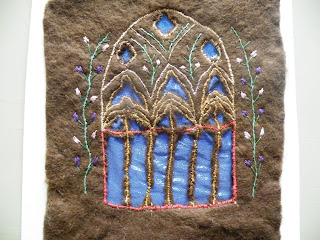 This piece of work was made from felted Llama fibres using the fleece in the original colour. The fibres are extremely light and warm and produce a felt with a beautiful sheen, lovely to work with on these snowy days! I sewed shapes for the window originally with gold metallic thread in a zigzag stitch and then cut out the desired areas. Hand stitching in coloured cottons was added followed by sewing a piece of blue metallic  organza to represent the stained glass window. I am at present working on a larger version around 3 feet in length to be displayed in the Creative Network Open weekend in Peel in early May. I have just washed some white Llama fleece to use for making a second large hanging for the same event. I will post photos of them when they are ready to hang. The work shown above has now been sold.
I had a huge quantity of frog spawn laid in my pond a couple of weeks ago, a bit later than usual. I thought that as it was so late it would be safe from frost for a change. The unexpected severe frost and snow has damaged it but I still hope to have plenty of tiny froglets to hop around my garden. MyJapanese contorted cherry tree is full of thousands of tiny flowers, usually covered in bumble bees, but it is too cold for the bees to venture out. In fact, a few weeks ago with Spring looking near, butterflies had started to emerge. It is difficult times for the wildlife. I had an old feather pillow which had burst open so I let the feathers blow onto my lawn. Today I have spotted a sparrow filling its beak with them to line a nest. I make sure that I don't hang my washed cashmere and Llama fibres outside at this time of year. I am sure that they would be most appreciated as bedding for nestlings, but it is a bit too precious for that.!
Posted by Pat K at 07:14