The second of my pieces in the "Air" competition is called The Butterfly Effect. .For this work I again did a background of hand made felt using pre dyed merino and Nepalese wool. The tornado shape was added to the base level with white merino wool,
I decided to hand stitch a large butterfly using a small needle and single stranded cottons with the template being a Peacock butterfly which are frequent visitors to my garden. It was quite tricky getting the patterns to match as I did it by eye, not having drawn all the internal shapes out as I felt this gave a more natural finish. There is a line of merino wool going from one wing to the tornado to mimic the effect of the butterfly flapping its wing and thus having a direct influence on the formation of the storm.
I visited London 2 weeks before Christmas and went to the Museum of Food near Southwark which was very small and only open for a few months but they are hoping to get funding for a large permanent museum on that theme.
One of the areas was a butterfly house with many exotic butterflies, the idea being to make a link between food and some of the vital pollinators. See one of those butterflies below. 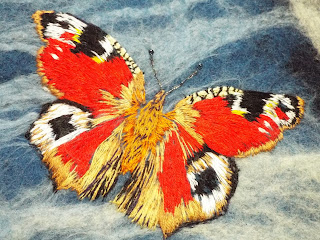 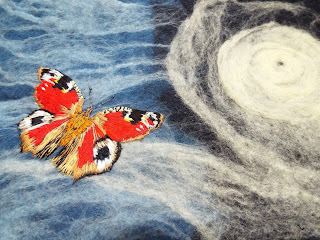 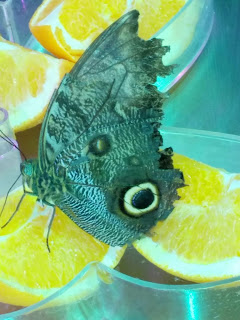