I have done 2 pieces of work with old jumpers as the base, one was a brown merino woollen and the other was a blue woollen one. I had a lot of sample lengths of threads in various thicknesses, colours and textures. Some of these threads were used to create the shape of the flower and were then embellished onto a piece cut from the jumper.
The first layer was white poster paint which I brushed over the surface including the threads so that some areas had the colour of the jumper and some of the threads showing through. When this was dry layers of acrylic inks in various colours were painted on, allowing the colours to blend with the result that secondary and tertiary colours were also produced.
Finally the image was stitched into using both free machining and hand embroidery.
I really liked the final outcomes which were unlike any work I had done previously. The top left image is called Dahlia-Inspired by Picasso and the one below it is called Echinacea-Inspired by Picasso. The photo on the right is a close up of Dahlia 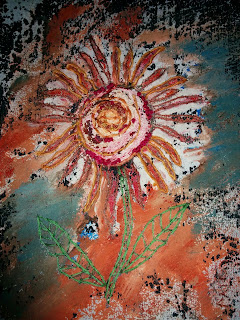 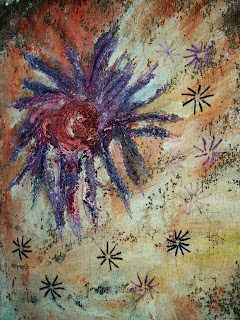 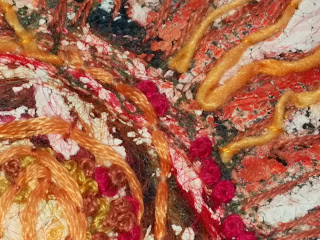