The u3a herb group met in Laxey where we initially discussed my trip to the Chelsea Physic Garden followed by a short tour round my forest garden. We are keeping herb related information in files, one of them contains recipes which we share around the group. I have been harvesting some of my dye plants; dyers chamomile[Anthemis tinctoria] and elecampane[Inula helenium], the latter I have not used before so I will keep you posted on that. There is a photo below left. I see that elecampane has many medicinal uses, it contains many vitamins and minerals so strengthens the immune system, lowers cholesterol, is used against chronic bronchitis and helps restful sleep. It is the elecampane root that is mostly used medicinally.  Further to my blogs on fibres I have posted a photo of my work below called rebirth. It is based on the birthing cloths used in Africa. I used an interesting combination of fibres; ivy dyed wool, some cashmere and llama fibres which give the fluffy white appearance. I then embellished it with beads. the whole piece had a delightful soft feel and was extremely light. 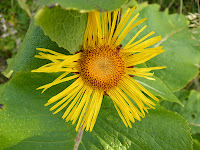 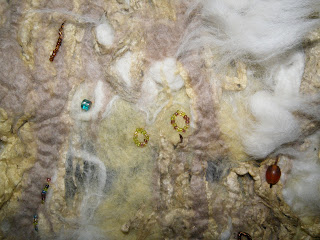