Last Autumn my daughter and I went for a trip to the Curraghs Wildlife Park where we took a lot of photographs of the animals and birds. I was also struck by the wonderful colours of the foliage and trees and the quality of the late afternoon light. I particularly liked the image seen below on the left which I have subsequently used as the basis of a new felted hanging. I used several elements of the photograph which I particularly liked; the group of silver birch trees and the purple grey colour of the sky.
The majority of the work is made from plant dyed fibres including ivy and elderberry dyes as well as materials and snippets of fibre from my huge stash. I have incorporated both hand and machine stitches which allows me to introduce plenty of texture and subtle colours. The hanging is in an exhibition at present along with another work which is a framed piece with 4 miniature scenes done in machine stitch.
This hanging has now been sold. 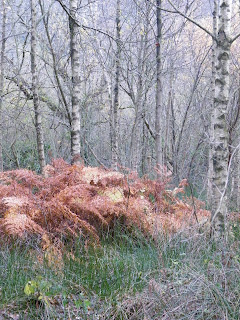 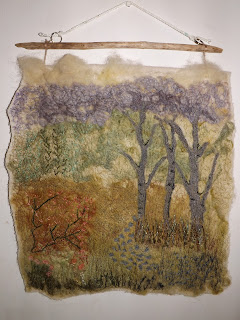 Our U3A herb group met at Rushen Abbey gardens, Ballasalla during May. We studied the plants which would be found in an Abbey garden. The plants were well labelled with information on their uses, some of the more unusual herbs planted there are the Gladdon Lily, Masterwort, Motherwort and Vervain. We then had a meeting in the Abbey restaurant where we had tea and cakes while discussing the history of herb gardens. We were fortunate to have access to a book in the i-museum Douglas which was written in 1919 by Eleanour Sinclair Rohde. It is called the History of herbs and has parts of it reproduced from a 1719 manuscript written by a butler. It was fascinating to discover the herbs used throughout the centuries and to learn that the use of vegetables in Britain, once common in Roman times, were not used by the majority of the population until early in the 19th century. Many flowers were used as herbs including roses, lilies, gillyflowers, periwinkle and peonies. Herbs were used in large quantities in Tudor times as stuffings and stewings for the huge quantities of meat that were eaten then.
The use of potatoes as a feed for the general population did not become common until 200 years after they were brought to England in Tudor times. Walter Raleigh's favourite cordial was strawberry wine.
Below is a photo of our U3A herb group and some of the plants in Rushen Abbey herb garden. 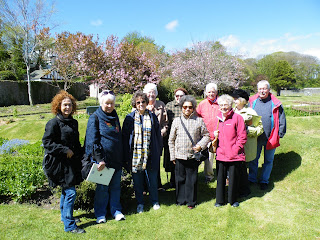 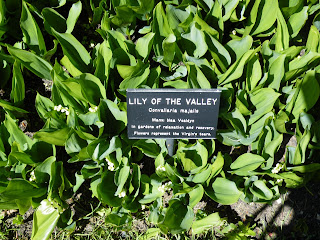 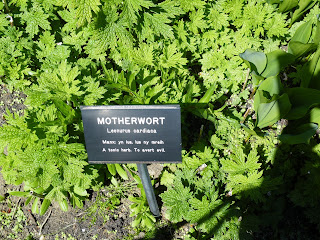